In my ESL proposal I argued that although many games are published each year, they tend to be based on a handful of game engines. These “engines” consist of software which determines how objects are displayed and how they interact in terms of rendering, lighting, physics and so on. I am also saying that developing an understanding of the limitations of a popular game engine and of what goes into a level of an existing game will equip me with the practical knowledge needed to more accurately comment on video games content with my students. Thus, this third project is centered on the acquisition of a skill set that I think is essential for learning basic game development, i.e. making a level of an existing video game. For this project, I chose the game engine Source, developed by Valve in 2004 and the game Left 4 Dead 2, for the simple reasons that I am most familiar with them as a player.

The benefits of building a level using this engine are numerous as they include access to game architecture, modelling and character animation with no licensing costs for those who want to build a level for these games. The interface one needs to learn in order to build a level using the Source engine is Hammer World Editor that automatically launches if one downloads the Left 4 Dead 2 Authoring Tools from Steam, which is the internet-based, multiplayer and social networking, digital distribution platform, powered by the Source engine. My goal is to create a playable level using these authoring tools, including creating custom textures, and appropriate use of game mechanics with the main focus being on what it is that makes a level fun to play.

From my experience playing with Hammer World Editor, I can say that anyone can start this process. So far I have been able to implement multiple tutorials from the website World of Level Design, particularly the ones on Left 4 Dead 2. What I have learnt is that making a level design is a very complex task. While anyone can start this process and learning the skillset step by step, finishing a complete level will take very long and complex knowledge of the tools necessary to create it. I started from creating custom textures from my own edited pictures but I soon realised that building the level step by step in this way is too complex for the time frame I have now. Thus, I have made the decision to leave building a level from scratch for later and instead use a GIS type of software in order to import real terrain into Hammer by means of using a tool called DispGen. This is an entirely new process to me and it is thus more difficult to find workflows for such a process online. The original terrain I am using looks like this:

After lots of trial and error, I have been able to access an empty map in Hammer World Editor that I can start building on that looks like this when it is freshly imported: 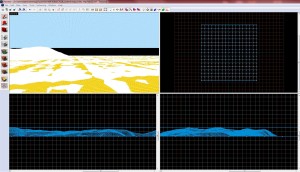 The next step was to start furnishing it with textures, displacements, a sky, water, characters, etc. As I started this process, I realised my map was too big and complex for what Hammer can support, so I limited it to only the top little part of the island you can see in these pictures. 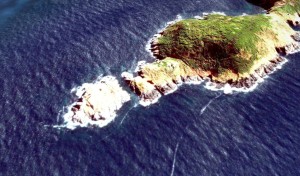 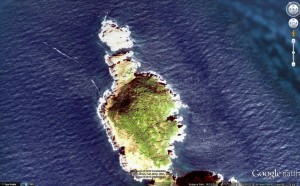 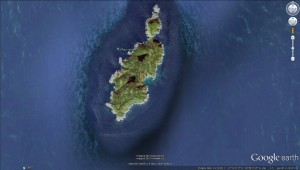 Once imported, this map was easier to work with.

Textures, a sky, some trees…

So, in a nutshell, from the first room that I ever made in Hammer, with innapropriate textures, no windows or doors, that was by all means, a complete A-ha moment when I made it – yes, the one below, please don’t laugh… 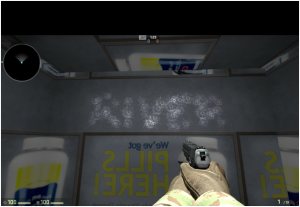 … to the maps I am playing with now, that have a skybox, some water surrounding the main texture for the terrain, some trees and the player positions added onto the map… 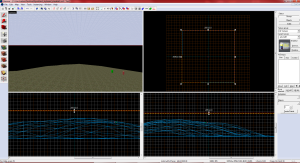 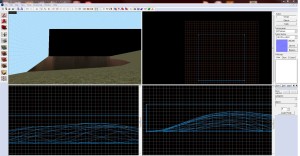 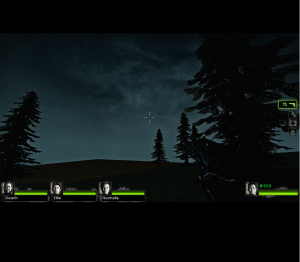 …I have made some progress and learnt lots of new skills but I am still very far from having a complete level. In conclusion, I am using this process as an opportunity to reflect on the gameplay, core mechanics, goals, artistic features that a complete beginner can actually learn to implement on their own and see where this project is taking me.

The Bare Bones of Left4Dead – Turning a level into a card game at GDC, San Francisco, March 2015 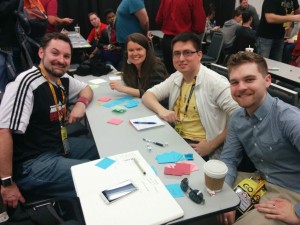 On the second day of the Game Design Workshop I participated in at the Game Developers Conference in San Francisco, I had the absolute privilege to be in a workshop with with these experienced game designers. On the left is Gary Napper, Lead Designer at Creative Assembly, a game studio that was nominated in several categories at the Game Developers Choice Awards (2015) and won in the Best Audio category for their title, Alien: Isolation.

The entire morning, we stripped down a Left4Dead level to its bare bones in order to reveal its core idea, or how people feel when playing the game. Next, we were asked to make a board game, using cards, dice or chips to outline its core mechanics.The idea we tried to capture in the board game was “frantic panic”. The card game was tested after the lunch break by another workshop participant, outside of our team, who had to share his feedback to the larger audience.

This simple exercise helped me understand this videogame so much better and would be so easy to use in any classroom setting. Working with these guys was a great learning opportunity and a lot of fun, as we tried to re-create the feeling of playing Left4Dead with all its frenzy. Here are some pictures from our workshop. 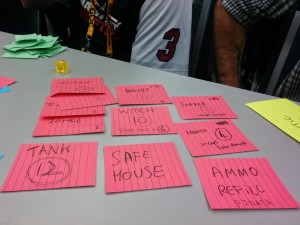 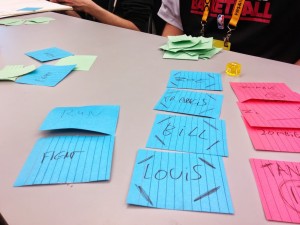